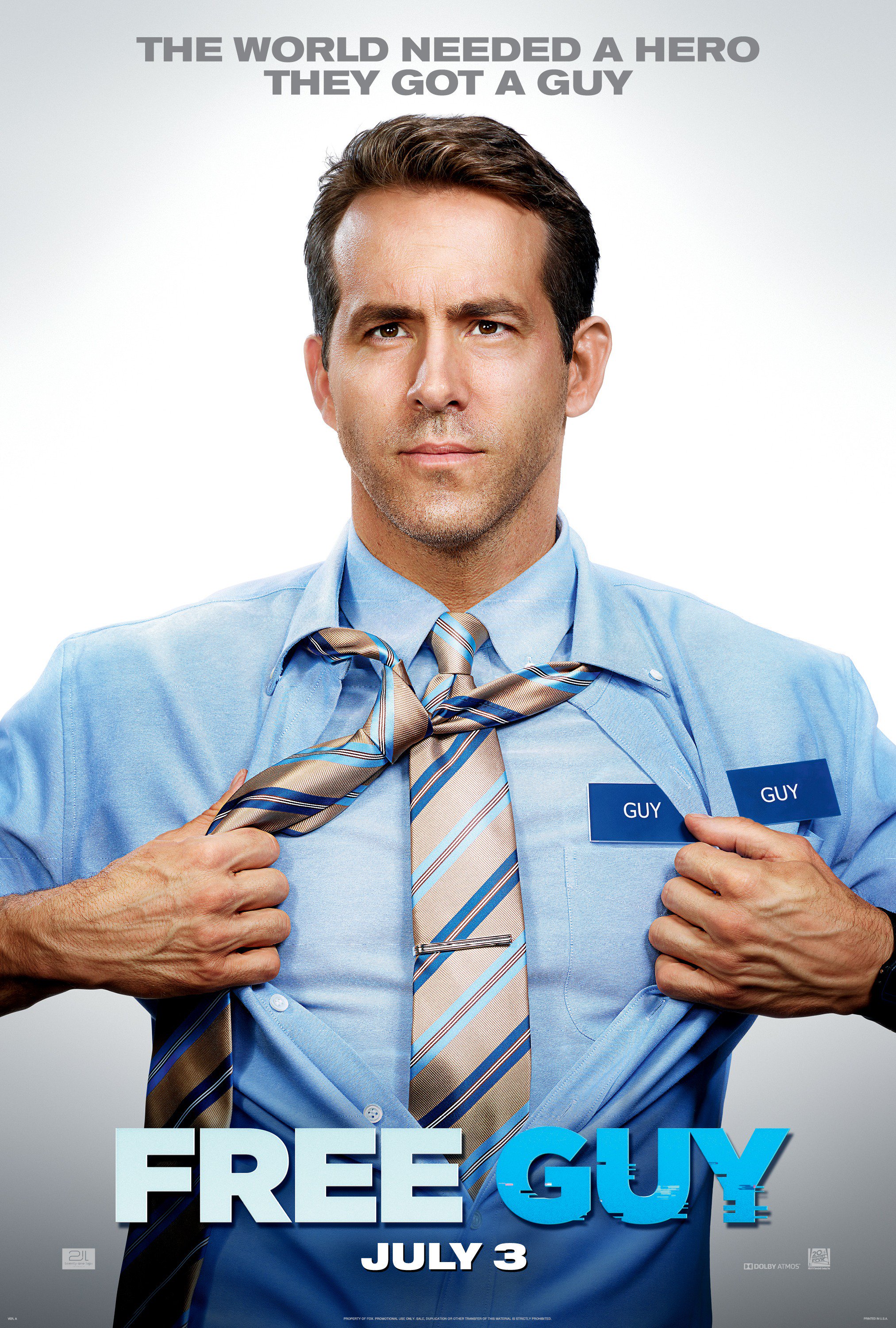 Ryan Reynolds is impossible to hate, you just can't do it, and Free Guy to us looks like the kind of film we want to make, it is full of stunts.

He plays an NPC in a video game called Guy, if you're not sure what a NPC is think about the character in a video game that walks around and gets in the way and you might shoot them for fun. They aren't that important but they add atmosphere to a game. He becomes self aware and in Reynolds boyish charming way he decides to be the hero, well sort of. He is still in the game and Taika Waititi plays the bad guy controlling the game.

It is made by Walt Disney Studios Motion Pictures

In “Free Guy,” a bank teller who discovers he is actually a background player in an open-world video game, decides to become the hero of his own story…one he rewrites himself. Now in a world where there are no limits, he is determined to be the guy who saves his world his way…before it is too late.

He is supported by a great cast including Jodie Comer as Millie/Molotov Girl, Lil Rel Howery as Buddy, Joe Keery as Keys, Utkarsh Ambudkar as Mouser. Several popular streamers will be appearing in the film, including Ninja, Jacksepticeye, Pokimane, and LazarBeam.

Free Guy is directed by Shawn Levy (Stranger Things, Night at the Museum, Real Steel), and will open in Australian cinemas on July 2 and hits the US on July 3, 2020.

How fun, but let's talk stunts.

This film has a bunch of fun stunts going on.

So good action takes just as long as bad action, and the thing that productions often find tricky is how long will a stunt take. This is of course is tricky to say as each stunt takes different time and some you may think will be fast aren't and visa versa.

The smashing through the glass takes seconds, putting on pads and clothes is minutes. Putting the sugar glass in and resetting is as fast as the process has been made by the art department. It's all relative.

That is why you have an experienced team, that is what makes those stunts fast and good bang for your buck. We know the stuntie can do it and may take a run through an empty hole a couple of times before the glass goes in, But the action for the stuntie in pretty basic and we train those skills sets daily, through gymnastics and martial art type exercises.

The time comes in when there is more things that need to happen or the risk goes up so more care has to be taken as everyone wants to go home to their families at night.

This is where rehearsals come in and planning. The better you go into the film days knowing exactly what you need then the faster you will get it and the time allows you to add more in on the day. Trust me the stunt team is keen.

Here's a couple of Tips:

1 - Take a camera and the DP and Director to rehearsals.

This seems like a no brainer but you would be surprised. We need the person who is going to shoot it to be there so we know the angles to sell the stunt and they are usually good at knowing the edit as well. A director sometimes needs more help especially if they aren't used to action and this is the best time to explore and find the drama in the action.

Why shoot it if you aren't going to do a rough cut and know if it works. Shoot it and edit in your phone or ipad or something. Edit you film early and don't get too bogged down on having the best gear there. That's what we do when we work with you on a film and design your action sequence.

A punch is a punch and a kick is a kick. Yes some are trickier than others but it's still a body performing an action. Style is often what changes the look of the stunt and the way it is shot. In Free Guy you can see they do some bad ass stunts but the shooting style softens it, which is cool in this world but would be the wrong angels etc in John Wick.

Give us an example of the films you like that you want the action to look like and then the action design can be tailored to that.

4 - Performers may force a compromise.

Something that happens nearly every time is that the action is out of the performers ability and with no budget or allowances including space or time to bring in supporting equipment like pads or wire work gear to rig the performer, then you get two choices.

Push on demanding the actor get better. This can be done with time and training but you will hit a limit of that performer in the time allowed.

You change and compromise. Sometimes a simple camera angle change will get you there. Other times it is a change in the action.

We always want to get you you action and these couple of pointers will help you get better action.

Put your film up with the other action movies at our channel and get more pro tips. Check us out and check out Free Guy, we think it is going to be a lot of fun.