Movie Collectables - Are they a good investment?

Most investments are a bit of a gamble and movie memorabilia is no different, but one thing is sure that some are a gold mine, but how do you know?

Well you don't and that's the truth but if you don't have them in mint condition then you definitely won't even have a shot and it seems it will always sell for more than you bought it for.

Could it end up worthless junk? Yes of course, but if you find the right buyer then you can make a profit and that has never been easier with he internet and all the places where sellers and buyers are connected.

However with a  little thought and paying attention to  what is popular it is definitely possible to get the right products. We have put together some ideas for you but remember to look after them because a beaten up toy is worth little but the closest to new the more valuable it will be. So you have to play with it then we suggest buying two. One to enjoy and one to store safely free from moisture and the elements to keep it in mint condition.

Toys that turn a profit 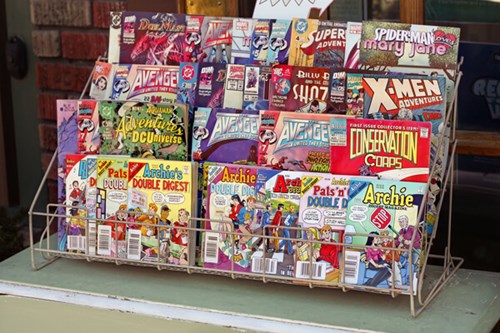 The right copy in your comic book collection could make you a major profit on your original purchase. Rare and vintage is the golden combination for comics, as one lucky owner of a 1938 copy of Action Comics found out when it sold for almost £770,000 at an auction in August this year.

The comic that launched Superman cost just 49p at the time of publication, which means its value increased by 157,000,000%.

Or to put it another way.

It doesn’t take an expert to realise that 248,600,000% is an impressive return on any investment. That’s what one comic book owner pocketed when they sold a first edition copy of Action Comics from 1938 (featuring the first ever appearance of Superman) for over £2.4m ($3.2m) on Ebay.

What’s important is rarity and it far outweighs the popularity of a character when it comes to the value of your doll or figurine. Recalled items are particularly rare, so despite being considered faulty at the time, they can fetch thousands at auction.

Lego, technically classed as construction toys rather than figurines, surprisingly doesn’t play by the same rules as most investment toys. Older does not mean more valuable, Lego sets from before the year 2000 aren’t worth all that much. However, between 2000 and 2015, pristine condition Lego sets increased in value each year by 12%. Lego sets, particularly those tied to film promotions, are retired on a regular basis too, making them rarer and thus more valuable.

Forgotten games that never made it into the mainstream, or were discontinued due to a lack of popularity, can be real money-makers - more so than popular vintage games like Monopoly, which was more widely distributed. While it might seem a little sad, unopened (and thus un-played) games fetch the most, since it’s safe to say all the pieces will still be in the box.

Invented back in 1938, versions of the rolled-up scroll/board game Buccaneer last year sold for £200.

While it’s not quite a board game, Dungeons and Dragons with their renewed popularity, thanks to Netflix sensation, Stranger Things. A vintage white box set of Dungeons and Dragons role-playing storybooks is listed on eBay with an asking price of £55910, and that’s a fifth printing! No listings appear for first printings, but chances are they could be worth a lot more. 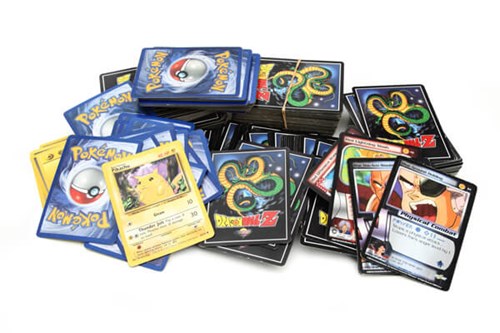 Back in the 90s, Pokemon cards retailed at around £3 for a pack of 10. Now, a full set of the first edition in top condition is worth a pretty penny – listings on Ebay range from £2000 – £20,000. Individual cards can be worth even more. If you own a series one 1999 ‘Charizard’ holo-card, for example, it could fetch up to £3,000. The holy grail of cards is the Pikachu Illustrator card: one fetched £44,000 in 2016. Don’t expect to find one lurking in your album though, as only around 39 were ever printed and few are thought to be in circulation today.

Holofoil, secret, promotional and first edition cards are among the most valuable Pokémon cards as are those with misprints on. A graded PSA 9 Pikachu Illustrator promo card sold on eBay in 2014 for a Snorlax-sized £54,545.

Before Pokemon, came the gruesome bubblegum trading card series, Garbage Pail Kids, a firm favourite from 1985. They don’t command the dizzying values of Pokemon cards, but individual rare examples, like ‘Nasty Nick’ (card 1a from series one in 1985) are listed on Ebay for £400 in mint condition – a reasonable return for a 12p investment over 32 years. 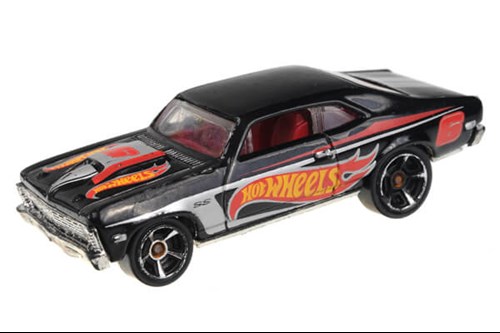 Highly collectable toy cars can be worth a brand new car of the line.

Original Matchbox cars, produced in the 50s, 60s and 70s can be quite valuable. One collection, made up of 2,281 cars, was auctioned off for £100,000 and individual pieces are on offer for incredible sums too. One tiny Morris Minor from Matchbox with a rare paint job listed on eBay for £950.

Rare colour schemes and designs can even bump up the price of popular Hot Wheels models from the 60s and 70s. A 1969 hot pink, rear-loading Volkswagen Beach Bomb, complete with surfboard accessory was bought for around £47,000 in 2000 by distinguished Hot Wheels collector, Bruce Pascal. Estimates from this year suggest the car is now worth between £80,000 and £121,000, with the Washington Journal calling it ‘the most valuable Hot Wheels vehicle in the world’. Worth over 100k is a big feat for a car that originally cost 99 cents. 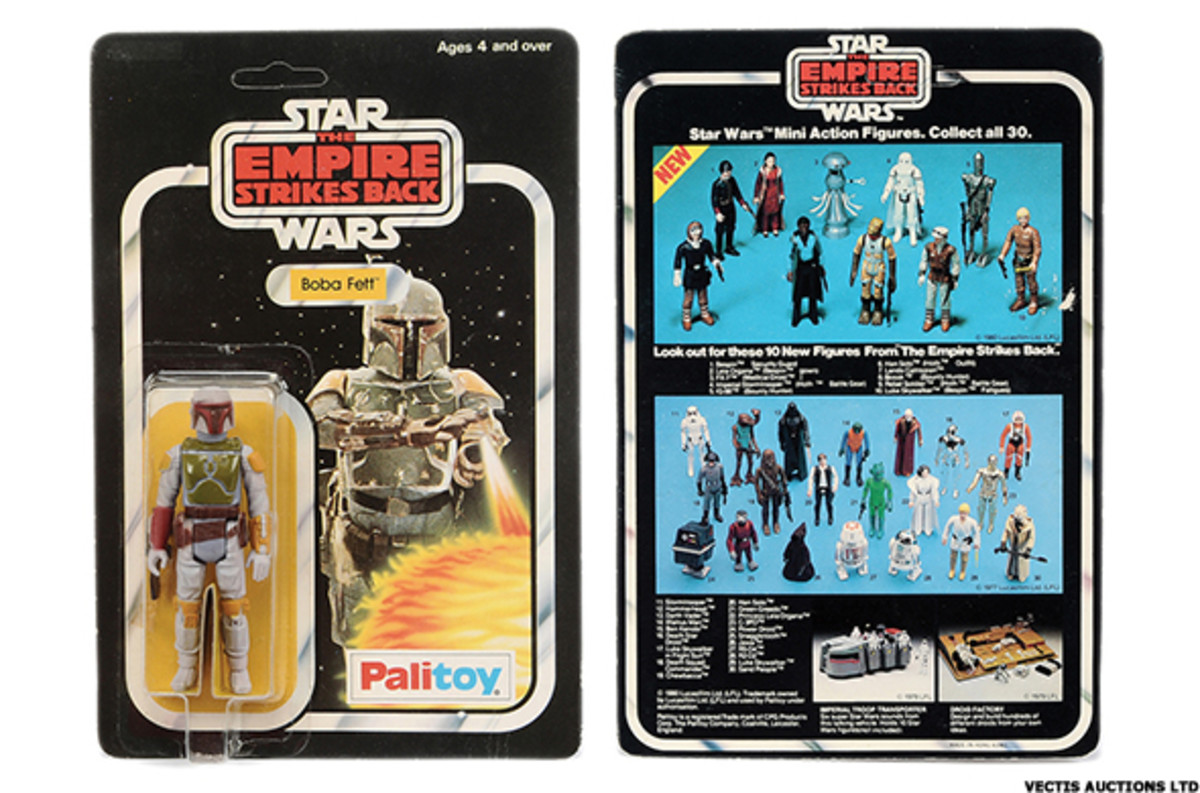 In early 2015 a Boba Fett figure, You know who that is went for 27k in an auction in Vectis, which is the worlds largest toy auction house. Imagine working there and not being able to play with a toy. It was sold by the UK Star Wars Fan Club chairmen Craig Steven who sold off 70 of his personal collection

According to Ramaci Stars Wars is perhaps the only film franchise with memorabilia worth such high prices.

Is it because we know that a deal was made for Lucas to keep the merch sales for a Director fee cut. Is it because it became so iconic. Maybe marvel could do the same.

"You've got people who collect Star Wars merchandise, but only from the first movie, because that's before people realised what a blockbuster franchise it was going to become, and so the amount of merchandise from it, in the first one or two years of its roll out, is highly collectable," Martin said. "If you were smart enough in 1978 to buy a plastic cape Jawa action figure for $1.99 and it's still in the package, you can sell it now for between $5,000 and $7,000, because it's very rare."

Even a seemingly ubiquitous toy franchise like Star Wars can produce items that command stellar price tags. *Spoiler alert* it’s only the rarest and limited-edition figures that fetch the highest prices – not your old Millennium Falcon with the missing roof. 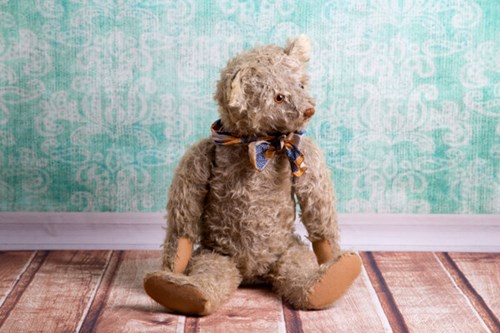 It’s not just dolls that can be worth a fortune. Good condition original Steiff bears dating from the early 1900s will set you back at least £25,000, and rare examples like the black Titanic Mourning bear, issued to commemorate the 1912 tragedy commands a price tag in excess of £90,000.

Collectables that are just collecting dust

Originally bought for around £3, most Beanie Babies barely make that much second hand. Clever production tactics fooled consumers into thinking the toys would be a commodity, but after a while the novelty wore off in a big way.

However, get your hands on one specific Beanie Baby, and you could be in luck. First edition Princess Diana memorial bears, produced following her death in 1997, are some of the most valuable Beanie Babies around. A few of these bears are listed on eBay with an asking price of hundreds and occasionally thousands of pounds.

These saccharine depictions of children in countryside scenes first appeared in 1935, based on drawings by German nun, Maria Innocentia Hummel. After soldiers returned home from World War II bearing them as gifts for their families, production shot up. By the sixties and seventies, Hummel’s figurines had entered airport gift shops, and continued intensive production shot a hole in their commodity status, causing their value to plummet.

It was mass production again, and not the sickly-sweet visage of the cabbage patch kids, that ultimately caused the devaluation of these ‘one of a kind’ dolls. Rarer models, such as the African American doll or dolls with freckles, can fetch greater sums, but most barely make more than £25.

These plastic promotional items won’t make you rich, but in a few cases, such as the 1990 Super Mario Bros 3 five-piece set, they might make you the price of a few happy meals.

Although some have reportedly sold for hundreds of pounds, a quick Ebay search reveals rare mint-condition boxed examples selling for less than £50.

This 90s phenomenon saw people hoarding small cardboard circles like they were diamonds. Today you can buy thousands for a few quid.

So how do you know what will make money and what won't?
It is hard to say, but there dos seem to be a pattern.
1. is it popular
This doesn't guarantee a successful investment but if n one is nostalgic for it, collecting it or have market reach then it probably won't be worth anything later on.
2. Imperfections
Things that were poplar and had an imperfection in print or design ad then it got recalled later seem to have value. Why because they are rarer than the mass produced products.
3. Was the film a break through or was there something controversial going on?
If a film or a franchise had a big impact on a generation then consider buying the toys you can because it maybe the nostalgia later that makes it worth a lot.
4. Cheap and expensive seem to make the cut.
Why because if it's cheap then most people with play with it and trash it, if it is expensive then most won't be able to buy it and keep it in good condition. Both ways make the item rare and rare is valuable.
So that's our spin on what toys or merchandise could be great investments for the future.
We have some great ones for you to look at, just click the image 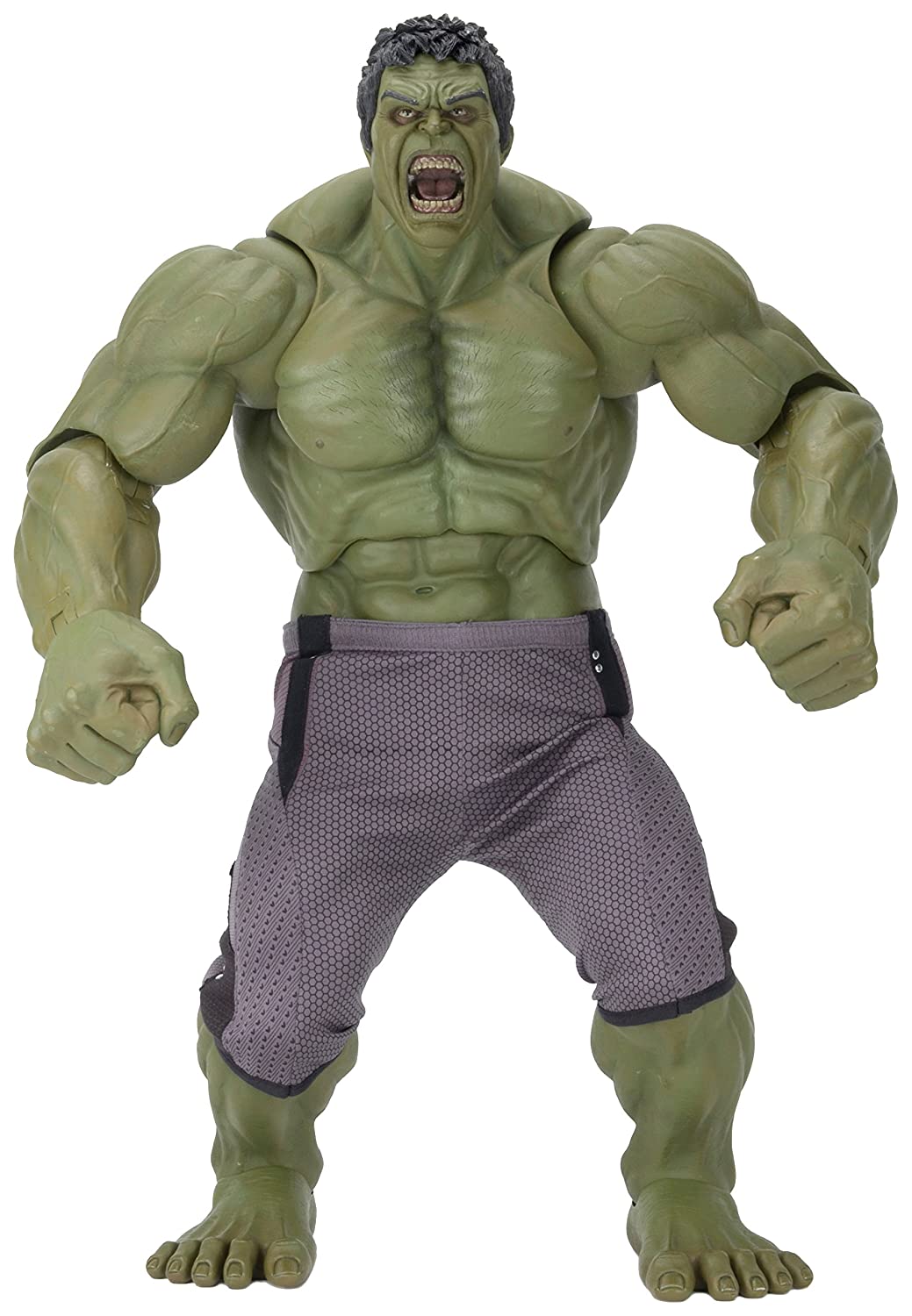