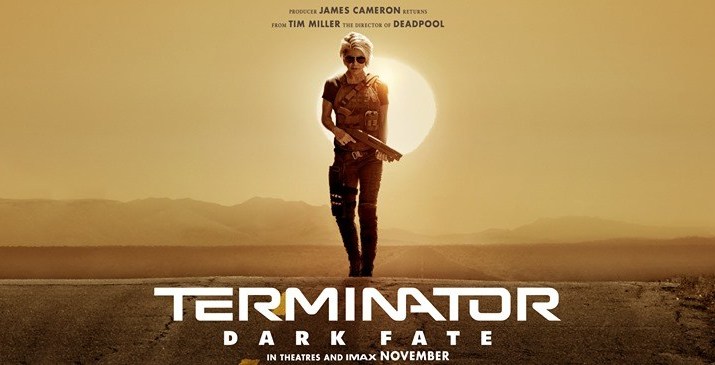 If you have seen it or not you can read as I will try not to spoil this film, but if I do accidentally please don't come looking for me.

So is he back?

Of course he is, he is on the poster, and so is Linda, and she is great.

She is still a total bad ass and i like the way the old and the new story lines were meshed together.

As I was watching the awesome crashes and explosions and fight scenes, I started to wonder why we love terminator so much.

Why is it that a future we are certainly capable of having in even a few years is appealing to me, why do I like it?

Of course there is the reluctant hero of Sarah who doesn't want what is forced upon her. I mean that is a lot. Imagine you are suddenly confronted with the task of staying alive to have a kid to save humanity from the robot that is currently trying to kill you, and you can barely hold down a decent job and pay rent.

Terminators, man, they just keep coming and they keep getting trickier. I always thought that the Terminator is more of the thing you would think could destroy humanity. If it's the environment, big business or out of control tech, it can be literal or a metaphor. Film is great like that.

You can hate a terminator and any violent act to try to stop it is acceptable, so smashing their head or have them explode in a truck to walk out of fire. Walk, not run. They are sprinters not marathon runners. So I think it lends to stunts being created, that if done to a normal human character it would finish the movie way too soon but would also seem cruel and over the top.

So there is the action spectacle that I love.

The original film had the machine against humanity in a life or death battle but after that we had machines that defended us. Is that a reflection of intelligence or even a machine obtaining a soul, is that even possible. I don't know.

Then that would have to mean there is a future for machines and humanity to work side by side and all we need to do is not give them access to the military system and we will be fine.

BUUUT, Let's pitch the next movie.

Terminators and humans work and live side by side and even marry. Everything is good in the future until one Terminator had a bad day. They broke up with their partner, got kicked out of the house and lost their job and someone slashed their future space car tyres. They go to a bar for a drink (I know, I had to, it's a great action movie cliche), anyway, they get poured a drink from a special bottle from the evil self hating Terminator bartender. Sparks shoot out of their head, red eye flashes and they revert to a base command file hidden deep in their system, it is called...Skynet. The effected Terminator now has a new mission, to break into the military base and connect to the system and start his own judgement day.

How is Sarah connected I hear you ask. It is revealed that she was the girlfriend and now she has to stop him...and this time it's even more personal that all the other times, that were also very personal.

Bam, Let's do this now, I will set up a meeting with our investors.

So what did I think of Terminator - Dark Fate?

It shouldn't matter, I think you should watch all films because people made them and not machines.

I loved this movie and I hope they make them forever.

If they keep blowing things up and crashing stuff and giving the action movie industry work then I'm all for it.

Ultimately I think the films touch a lot of subjects including inter personal skills in a group dynamic and people bonding and working toward a common goal despite of their differences. When survival is the daily struggle then beliefs and differences become less of an issue. Not less important but less of an immediate issue. Working together as part of the human race and having honest and clear communication is important. Many characters in the terminator movies who survive are clear with what they say, if they aren't then they end up on a Terminators termination score card and added to the DNA database.

A terminated human victim starts to leave their body and become a ghost. They refused to walk to the light. They are enraged. They had a date that night with someone they have loved for a very long time and tonight was going to be perfect, they know it was because they planned it, perfect. But it wasn't perfect, they got killed buying eggs. Eggs! dam it! They in time learn how to control their manifestation so they can interact with the physical world. They track down the Terminator and that's when they enter a three way battle with the Terminator and Sarah. The Terminator gets away and Sarah and our ghost eventually work together and team up for a final battle with the current Terminator threat.

Come on, you can't honestly tell me you wouldn't want to watch that film. It's Ghost crossed with Terminator.

Then the Terminator could become a ghost, oh wait now it's getting ridiculous.

If you love the Terminator films I hope you enjoy it and if not, it's ok it happens, maybe they will make one you like more next time.

Thanks for hanging around to the end of my Terminator rant.

See you on set sometime